Supporting article T: The various symbiotic relationships that exists between organisms and how this may apply to evolution.

In a symbiotic commensalism, the clownfish feeds on small invertebrates which otherwise potentially could harm the sea anemone, and the fecal matter from the clownfish provides nutrients to the sea anemone.
Symbiosis (from Ancient Greek sýn “with” and bíōsis “living”) is close and often long-term interactions between different biological species. In 1877 Bennett used the word symbiosis (which previously had been used of people living together in community) to describe the mutualistic relationship in lichens. In 1879 by the German mycologist Heinrich Anton de Bary, defined it as “the living together of unlike organisms.”

The definition of symbiosis is in flux, and the term has been applied to a wide range of biological interactions. The symbiotic relationship may be categorized as mutualistic, commensal, or parasitic in nature. Some symbiotic relationships are obligate, meaning that both symbionts entirely depend on each other for survival. For example, many lichens consist of fungal and photosynthetic symbionts that cannot live on their own. Others are facultative, meaning that they can but do not have to live with the other organism.

Symbiotic relationships include those associations in which one organism lives on another (ectosymbiosis, such as mistletoe), or where one partner lives inside the other (endosymbiosis, such as lactobacilli and other bacteria in humans or zooxanthelles in corals). Symbiotic relationships may be either obligate, i.e., necessary for the survival of at least one of the organisms involved, or facultative, where the relationship is beneficial but not essential for survival of the organisms.

Endosymbiosis is any symbiotic relationship in which one symbiont lives within the tissues of the other, either in the intracellular space or extracellularly. Examples are rhizobia, nitrogen-fixing bacteria that live in root nodules on legume roots; actinomycete nitrogen-fixing bacteria called Frankia, which live in alder tree root nodules; single-celled algae inside reef-building corals; and bacterial endosymbionts that provide essential nutrients to about 10%–15% of insects.

Ectosymbiosis, also referred to as exosymbiosis, is any symbiotic relationship in which the symbiont lives on the body surface of the host, including the inner surface of the digestive tract or the ducts of exocrine glands. Examples of this include ectoparasites such as lice, commensal ectosymbionts such as the barnacles that attach themselves to the jaw of baleen whales, and mutualist ectosymbionts such as cleaner fish.

Mutualism is any relationship between individuals of different species where both individuals derive a benefit. Generally, only lifelong interactions involving close physical and biochemical contact can properly be considered symbiotic. Mutualistic relationships may be either obligate for both species, obligate for one but facultative for the other, or facultative for both. Many biologists restrict the definition of symbiosis to close mutualist relationships. 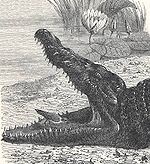 An Egyptian Plover picking the teeth of a Nile crocodile

A large percentage of herbivores have mutualistic gut fauna that help them digest plant matter, which is more difficult to digest than animal prey. Coral reefs are the result of mutualisms between coral organisms and various types of algae that live inside them. Most land plants and land ecosystems rely on mutualisms between the plants, which fix carbon from the air, and mycorrhyzal fungi, which help in extracting minerals from the ground.

There are also many types of tropical and sub-tropical ants that have evolved very complex relationships with certain tree species.

Commensalism describes a relationship between two living organisms where one benefits and the other is not significantly harmed or helped. It is derived from the English word commensal used of human social interaction. The word derives from the medieval Latin word, formed from com- and mensa, meaning “sharing a table”.

Commensal relationships may involve one organism using another for transportation (phoresy) or for housing (inquilinism), or it may also involve one organism using something another created, after its death (metabiosis). Examples of metabiosis are hermit crabs using gastropod shells to protect their bodies and spiders building their webs on plants. 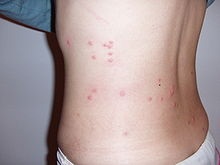 Flea bites on a human is an example of parasitism (the flea as parasite to the human host in this case).

A parasitic relationship is one in which one member of the association benefits while the other is harmed. Parasitic symbioses take many forms, from endoparasites that live within the host’s body to ectoparasites that live on its surface. In addition, parasites may be necrotrophic, which is to say they kill their host, or biotrophic, meaning they rely on their host’s surviving. Biotrophic parasitism is an extremely successful mode of life. Depending on the definition used, as many as half of all animals have at least one parasitic phase in their life cycles, and it is also frequent in plants and fungi. Moreover, almost all free-living animals are host to one or more parasite taxa. An example of a biotrophic relationship would be a tick feeding on the blood of its host.

Amensalism is the type of symbiotic relationship that exists where one species is inhibited or completely obliterated and one is unaffected. This type of symbiosis is relatively uncommon in rudimentary reference texts, but is omnipresent in the natural world. An example is a sapling growing under the shadow of a mature tree. The mature tree can begin to rob the sapling of necessary sunlight and, if the mature tree is very large, it can take up rainwater and deplete soil nutrients. Throughout the process the mature tree is unaffected. Indeed, if the sapling dies, the mature tree gains nutrients from the decaying sapling. Note that these nutrients become available because of the sapling’s decomposition, rather than from the living sapling. 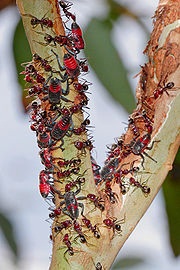 Leafhoppers protected by an army of meat ants

While historically, symbiosis has received less attention than other interactions such as predation or competition, it is increasingly recognised as an important selective force behind evolution, with many species having a long history of interdependent co-evolution. In fact, the evolution of all eukaryotes (plants, animals, fungi, and protists) is believed under the endosymbiotic theory to have resulted from a symbiosis between various sorts of bacteria.

6.1 Vascular Plants
Up to 80% of vascular plants worldwide form symbiotic relationships with fungi, for example, in arbuscular mycorrhiza

6.2 Symbiogenesis
The biologist Lynn Margulis, famous for her work on endosymbiosis, contends that symbiosis is a major driving force behind evolution. She considers Darwin’s notion of evolution, driven by competition, as incomplete and claims that evolution is strongly based on co-operation, interaction, and mutual dependence among organisms. According to Margulis and Dorion Sagan, “Life did not take over the globe by combat, but by networking.”

6.3 Co-evolution
Symbiosis played a major role in the co-evolution of flowering plants and the animals that pollinate them. Many plants that are pollinated by insects, bats, or birds have highly specialized flowers modified to promote pollination by a specific pollinator that is also correspondingly adapted. The first flowering plants in the fossil record had relatively simple flowers. Adaptive speciation quickly gave rise to many diverse groups of plants, and, at the same time, corresponding speciation occurred in certain insect groups. Some groups of plants developed nectar and large sticky pollen, while insects evolved more specialized morphologies to access and collect these rich food sources. In some taxa of plants and insects the relationship has become dependent, where the plant species can only be pollinated by one species of insect.