Symbiosis basically means ‘living together’ and in the context of marine biology refers to a close relationship between two species, for example the Clown fish and the anemone.

These symbiotic interrelationships can be divided into three main categories; Mutualism, when both species involved benefit from the relationship, Commensalism, when one species benefits and the other isn’t affected, and Parasitism, when one species benefits, and the other is harmed in the process.
There is a fourth, less ‘intimate’ category of symbiosis known as Mimicry, which involves one species imitating another to gain the benefits enjoyed by that species. For example a Banded snake eel mimicking a venomous sea snake in order to deter predators.

“Why live together?”
There is always competition for food and territory in the animal world. To avoid competing with other species it is expedient for an animal to find a ‘specific’ niche within their environment. Another way to avoid direct competition is to form a stable relationship with another species, one other than a ‘predator-prey’ relationship. This allows two species to ‘harmoniously’ share the same space and/or a food supply.
Often a fish can be involved in two symbiotic relationships at once; suffering from parasitism on the one hand, and benefiting from mutualistic cleaning attention on the other. Using that example, the saying “one mans rubbish is another mans treasure’, could be changed to read; “one creature’s parasites are another creature’s food!”

Symbiosis is always ‘inter-specific’; that is it occurs only between different species; intra-specific relationships (relationships within a single species) cannot be described as symbiosis.

Commensalism:
We will begin by looking at commensalistic relationships, as there are some very interesting examples of this form of symbiosis where we have been diving, here in Papua New Guinea.
Commensalism usually occurs between a species that is either vulnerable to predation or with an inefficient means of locomotion, and another species with a relatively effective system of defence. For example certain Goby species live amongst the spines of toxic sea-urchins such as Astropyga radiata, so gaining protection from their host; while a similar relationship occurs between Man-of-war fish and the ‘Portuguese Man of War’ jellyfish. In both instances the fish benefit, while their host is neither advantaged nor disadvantaged by the relationship. 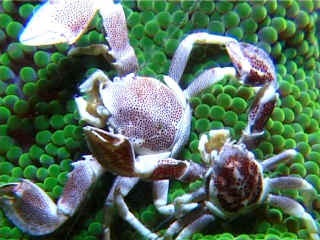 Crabs and Shrimps often form commensalistic symbiotic relationships with anemones in tropical waters, again for the purposes of protection from predation. For instance the Anemone crab, Neopetrolisthes oshimai, which is a filter feeding Porcelain crab, lives and captures its food from within the tentacles of giant anemones.

While diving in Papua New Guinea we have been fortunate enough to see several interesting commensalistic relationships. Apart from the Anemone crabs, we have also filmed Imperial shrimps, Periclimenes imperator, hitching a ride on the large sea cucumbers found here, (genera The

Stichopus). The shrimps get transported through a large area of potential food by their host with only a minimal expenditure of energy on their part. They can be observed getting off their host cucumber to feed in productive areas, and back on for a ride to the next spot! The Imperial shrimp also rides on large nudibranchs such as genus Dendrodoris, which although slow moving, afford the shrimp with protection by virtue of their toxic chemical secretions and warning colouration. Although this is currently classed as a commensalistic relationship, it is possible that the Emperor shrimp may assist the nudibranch by removing parasites. 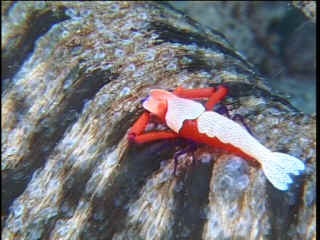 Imperial shrimp hitching a ride on a Sea-cucumber

One especially amazing example of commensalism that I have yet to witness occurs between the Pearlfish and a particular species of sea cucumber. The Pearlfish spends the day inside the alimentary tract (‘intestines’) of the sea cucumber, and at night emerges from its anus to feed on small crustaceans! In this manner it gets a safe place to live; and while not appearing to gain any benefit from the relationship, the cucumber is not harmed.

Parasitism :
In a parasitic relationship, the host species is always exploited to some degree, although often in such a way that its health is impaired only slowly. This allows the parasite to exploit its host over a longer period. Many parasites only spend a portion of their lives in the relationship, either to reproduce, or during an initial growth stage.

External marine-parasites are usually crustaceans from the order ‘Isopoda’ or ‘Copepoda’ and can often be seen by the naked eye. Although parasitism is an unpleasant concept to many people, the adaptations of parasites are quite amazing when viewed objectively. Isopods for example have a flattened body shape for streamlining against the body of their host, complex sucker-like organs for firm attachment and a set of sharp mandibles. An interesting adaptation of isopods is their ability to moult only half their exoskeleton at a time unlike most crustaceans, which shed their entire exoskeleton at once. This means the grip on the host species is not lost while they are in the ‘soft’ state. 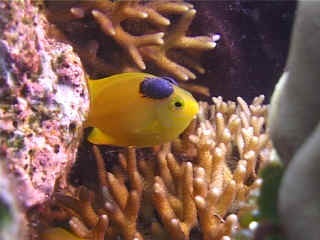 Although Isopods are usually parasitic, there are some species that attach themselves to a fish without damaging tissue, and scavenge floating food particles rather than feeding on their host, ie they are in a commensalistic interrelationship.

Mutualism :
Mutualism is one of the most interesting forms of symbiosis, as it is a benefit to both species involved.
An unusual and ‘clever’ example of mutualism that we were fortunate enough to film in PNG was that of the Boxer crab, Lybia tesselata, which carries a pair of small anemones in it chelipeds (claws). When approached by a predator it waves these around presenting the stinging tentacles so as to deter the marauder. The anemones benefit from the small particles of food dropped by the crab during feeding. 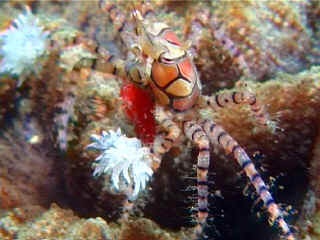 Boxer crab with anemones in claws

A particular type of mutualistic interrelationship that many divers will have encountered is ‘Cleaning symbiosis’, a widespread form of mutualistic relationship common to both temperate and tropical waters; Gobies, Wrasse, and Shrimps being among the common fish-cleaning species. The fish being cleaned are often termed ‘client fish’ and the sites they go to to be cleaned are known as ‘Cleaning stations’ … in tropical waters these areas of the reef are quite clearly defined by the numbers of stationary fish and their attendant cleaner organisms.

Colour and markings play an important part in recognition of cleaner species, and in fish a horizontal stripe is often a ‘cleaner sign’ and affords the owner some immunity to predation, with many cleaner fish even entering into the mouth and gills of large, otherwise carnivorous species. In some cases, notably with many of the Wrasses, it is just the juvenile of a fish species that is a cleaner, while the mature fish progress onto a diet of larger invertebrates. Interestingly, some cleaner fish will even attend to human ‘customers’, with authentication of one juvenile Grey Angelfish picking at the open wound of an observer on three successive days.

As well as removing parasites, cleaners also remove dead skin, tissue and mucous, and in doing so, perform a valuable function in maintaining the health of marine populations. In fact most reef fish spend a reasonably significant proportion of their day at cleaning stations. Often ‘client fish’ undergo a colour change, which is believed to be for one of two reasons; either as a signal that they require cleaning, or so that external parasites stand out against the skin.
One example of a mutualistic relationship we witnessed in the waters around Milne Bay was that of Alpheid shrimps and certain gobiid species. The shrimp digs a deep burrow, and while underground is quite safe, however it has poor vision and once above ground it is vulnerable to predators. The goby stands guard at the entrance, and signals the shrimp with a flick of its tail when it is safe to come out. The goby benefits by getting a burrow to live in and the shrimp gets warning of predators!
Another common example is the various species of Anemone fish. These depend heavily on their host, being unable to breed or survive predation without their host anemone. The anemone on the other hand can survive without its attendant Clown fish, although it is hypothesized they may help aerate the tentacles of the anemone, as well as get rid of parasites. 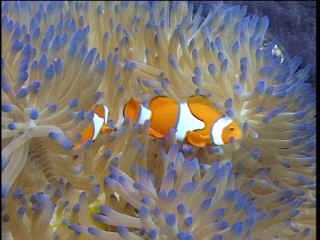 The Anemone Hermit crab Dardanusm pedunculatus is another creature having a clever inter-relationship with small sea anemones; it attaches several anemones to its shell, as both camouflage and as a deterrent to possible predators. The anemone in its turn gets a ‘mobile home’ allowing it greater exposure to food than it would otherwise have if stationary. 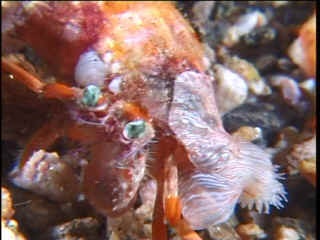 Mimicry ;
Mutualism could be thought of as the most ‘developed’ form of symbiosis from the point of view that it is reciprocally beneficial, but there is a further category of symbiotic relationship which is less ‘direct’ than those so far discussed. Mimicry is a form of symbiosis where a species may mimic the colours, patterns, or even behaviour of another species for one of two reasons. Either to be able to get closer to unsuspecting prey or in the case of a harmless species; to gain protection by imitating a predator or poisonous species. These two variations are known as ‘Aggressive mimicry’, and ‘Batesian mimicry’ respectively. 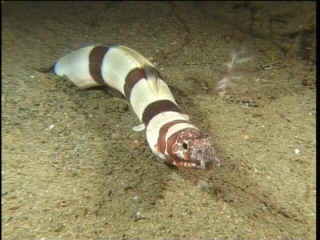 The Harlequin Snake eel, Myrichthys colubrinus, for example is a fairly reclusive forager that mimics the Banded sea snake, Laticauda colubrina, an extremely toxic species with conspicuous black and white warning colouration. As such, predators that would otherwise regard it as prey, are more likely to avoid itavoid it. (Batesian mimicry). 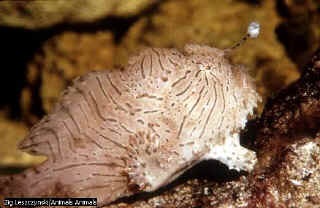 The Frogfish on the other hand, a species of Anglerfish, engages in ‘aggressive mimicry’. This species has a fleshy filament or ‘lure’ just above its lip with which it mimics the movements of a small organism in order to attract its prey.

Another ‘aggressive mimic’ is the Yellowtail Snapper, Ocyurus chrysurus. This species mimics the Yellow Goatfish, which roam the bottom in schools browsing on small invertebrates. By blending in with these schools of non-predatory fish the Yellowtail Snapper is able to get closer to small prey fish and has a much higher ‘capture success-rate’.

One of the most interesting mimic species we were fortunate to see here in PNG was the aptly named Mimic octopus. This remarkable cephalopod takes on the form of a variety of different animals by bunching up or elongating its arms to mimic anything from a stingray to a Lionfish or even a sea-snake. It could be that this species employs mimicry both as a means of defence and predation, making it both a batesian and aggressive mimic. 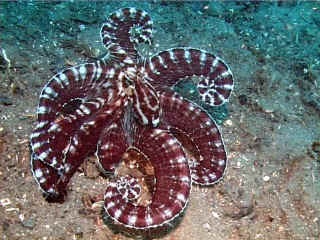 These are all examples of animals that mimic other animals. When an organism mimics their environment however, such as a Scorpionfish amongst bottom detritus, or a Seahorse entwined around a piece of Sargassum weed … it then becomes camouflage, a whole new topic!
Nature has a way of maximising utilisation of the environment so that every possible ecological niche is filled… but without any unsustainable overlap. There may be several species competing within a single micro-environment, but each can exist in a type of ‘harmony’ with the other…a sustainable balance is reached. Symbiosis is a prime example of this paradigm, by living beside, on, or even inside another organism; every potential use is made of the resources available in a sustainable fashion. No matter whether it is a parasitic; mutualistic, or a commensalistic relationship, it is an illustration of nature’s ability to co-achieve efficiency and equilibrium…something humans would be wise to emulate.