All ecosystems depend on two important processes: The flow of energy, and the recycling of nutrients. These processes take place in Energy and nutrient transfers.

Such a transfer takes place in a biogeochemical cycle – a circuit or pathway by which a chemical element or molecule moves through both biotic (“bio-“) and abiotic (“geo-“) compartments of an ecosystem. In effect, the element is recycled, although in some such cycles there may be places (called “sinks”) where the element is accumulated or held for a long period of time.

All chemical elements occurring in organisms are part of biogeochemical cycles. In addition to being a part of living organisms, these chemical elements also cycle through abiotic factors of ecosystems such as water (hydrosphere), land (lithosphere), and the air (atmosphere); the living factors of the planet can be referred to collectively as the biosphere. All the chemicals, nutrients, or elements — such as carbon, nitrogen, oxygen, phosphorus — used in ecosystems by living organisms operate on a closed system, which refers to the fact that these chemicals are recycled instead of being lost and replenished constantly such as in an open system. The energy of an ecosystem occurs on an open system; the sun constantly gives the planet energy in the form of light while it is eventually used and lost in the form of heat throughout the trophic levels of a food web.

All living organisms require energy. The ultimate source of all this energy is the sun. Solar energy is trapped by plants, and then transferred from organism to organism in a food chain. At each stage in this transfer much of the energy is lost to the environment.

Living organisms also require nutrient elements – in particular carbon and nitrogen – which they take from the environment. If this were just a one-way process, ecosystems would soon run out of these nutrients; but in fact they are returned to the environment, with the help of bacteria, via nutrient cycles.

• Some is used up at the first trophic level as a result of photosynthesis, which uses up lots of solar energy in making glucose.
• Some is used up in respiration, and given off as heat
• Some is lost, in the form of biological material and heat, through excretion. (This energy is actually transferred to the decomposer food chain: more about this later!)
• Some is used for movement and transport.

All the energy used in these ways returns to the environment, and is not available to the next trophic level. The level of available energy declines as it is transferred through a foodchain.
Flows and cycles

As well as the flow of energy through a food chain, other flows and cycles can be found within ecosystems. Ecosystems have water cycles and nutrient cycles. So when an animal eats another animal or a plant it not only obtains that organism’s energy, but its water and nutrients as well.

Carbon and the carbon cycle

The element carbon is a basic constituent of all living organisms. Its atoms combine easily with other atoms to form a huge variety of molecules. Some of these (eg carbon dioxide, carbohydrates) have names which make it obvious they are carbon-based, while others (eg fat, proteins) you just have to remember.

All cells – whether animal, plant or bacteria – contain carbon because they all contain proteins, fats and carbohydrates. Plant cell walls for example are made of cellulose, a carbohydrate.

Living organisms need carbon in order to:
• Make food. Green plants get their carbon from the carbon dioxide in the air, which enters the leaves and is used for photosynthesis. A product of photosynthesis is glucose – another carbon-based compound.
• Make energy. In respiration glucose reacts with oxygen to produce energy (with carbon dioxide as a by-product).
• Make new cells for growth and repair. Carbon compounds are essential cellular building-blocks.

The carbon cycle
Carbon cycles through ecosystems, moving repeatedly from one organism to another, and between organisms and the environment. The carbon cycle is a key factor in maintaining the balance of an ecosystem. It works like this:
1. Plants photosynthesise, taking carbon in the form of carbon dioxide from the atmosphere and locking it into the carbohydrate glucose. (They also respire, giving out carbon dioxide; but they take in much more than they give out.)
2. Animals get their carbon from eating either plants (carbohydrates) or other animals (proteins and fats) which they then digest. They respire, giving off carbon dioxide to the environment.
3. Waste carbon-based material is excreted by animals, and is digested by decomposers – mainly microbes and fungi. The decomposers also respire, releasing carbon dioxide.
4. When animals die, their remains may be either eaten by scavengers (for example, crows) or digested by decomposers. Both scavengers and decomposers respire, giving off more carbon dioxide.
5. In certain conditions both animal and plant remains may become fossilised, eventually forming carbon-based fossil fuels (coal, oil and gas).
6. Both fossil fuels and plant material (wood) may later be combusted – releasing still more carbon dioxide to the environment.

79% of the air around us is nitrogen . Living things need nitrogen to make proteins, but they cannot get it directly from the air because nitrogen gas is too stable to react inside an organism to make new compounds. 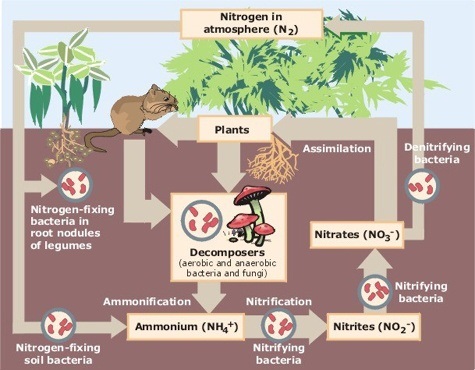 Nitrogen fixation happens in three different ways:
1. The energy in a lightning bolt can split the di-atomic nitrogen molecule in the air allowing each nitrogen atom to react with oxygen to form nitrogen oxides. These oxides are washed to the ground by the rain where they form nitrates.
2. The Haber process is used by industry to produce ammonia from nitrogen. Ammonia is used to make fertiliser for farmers to feed their crops.
3. Nitrogen-fixing bacteria found in the soil and in the root nodules of leguminous plants fix nitrogen into a usable form.
Nitrogen compounds are returned to the soil through:
• excretion and egestion by animals
• the death and decay of plants and animals
The nitrogen compounds returned in this way are changed back to nitrogen gas by denitrifying bacteria which live in the soil – thus completing the cycle.

The Water cycle
The water cycle describes how water moves from the ocean, to the atmosphere (evaporation), to land (rain) and back to the ocean (rivers). On the way the water will be intercepted by plants and animals, both of which need water to survive

The diagram shows the continuous cycle of water between the ocean, the atmosphere and the land.