Supporting article P: A graphic depiction of the Biogeochemical Cycles

Biogeochemical Cycle : the cycling of chemical elements required by life between the living and nonliving parts of the environment. Some examples of these chemical elements are H2O, P, S, N2, O2 and C.
These elements cycle in either a gas cycle or a sedimentary cycle; some cycle as both a gas and sediment.
In a gas cycle elements move through the atmosphere. Main reservoirs are the atmosphere and the ocean.
In a sedimentary cycle elements move from land to water to sediment. Main reservoirs are the soil and sedimentary rocks. 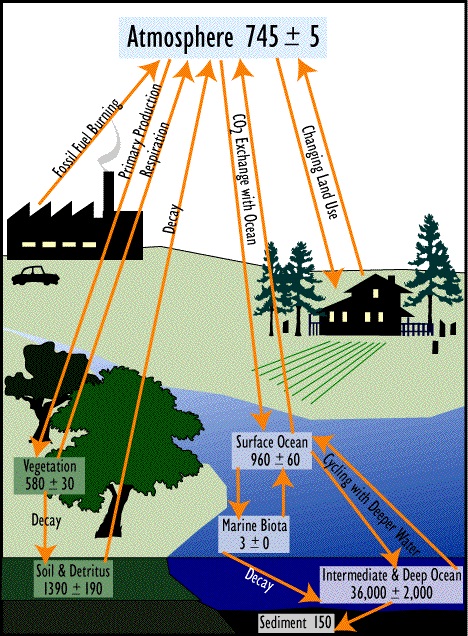 Human induced changes in the global carbon cycle:
– The Earth is getting warmer.
– The 20th century has been the warmest in the last 600 years.
– This century is about 1 degree Fahrenheit warmer than last century.
– The balance of evidence suggests that burning of fossil fuel (eg. coal, oil, natural gas), which emits CO2 as a waste, is the cause.
– CO2 is a “Green House” gas – it traps heat at the Earth’s surface. (H2O vapor and methane are also examples of green house gases)

Signs that the climate is warming:
– Plants start blooming 8 days earlier in spring than 11 years ago.
– Birds from the United Kingom lay eggs earlier.
– Buds on trees appear earlier and leaves fall later in the Northern Hemisphere.
– Alaska, North West Canada, and Siberia have warmed up as much as 5 degrees Fahrenheit in the last 30 years. 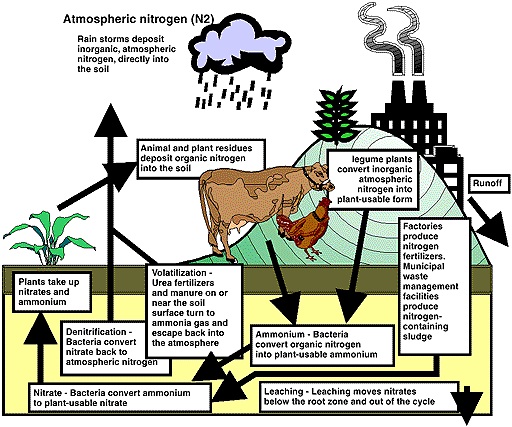 Facts:
– Nitrogen (N) is an essential constituent of protein, DNA, RNA, and chlorophyll.
– N is the most abundant gas in the atmosphere, but it must be fixed or converted into a usable form.

Nitrogen Fixation Methods:
1) High energy fixation- a small amount of atmospheric nitrogen is fixed by lightening. The high energy combines N and H2O resulting in ammonia (NH3) and nitrates (NO3). These forms are carried to Earth in precipitation.
2) Biological fixation: achieves 90% of the nitrogen fixation. Atmospheric nitrogen (N2) is split and combined with hydrogen (H) atoms to form ammonia (NH3).

Once NH3 is in the soil it combines with H+ ions to form ammonium ion (NH4), or without it to form NO3. NH4+ and NO3 are readily absorbed by plants.

Facts:
– Component of DNA, RNA, ATP, proteins and enzymes
– Cycles in a sedimentary cylce
– A good example of how a mineral element becomes part of an organism.
– The source of Phosphorus (P) is rock.
– It is released into the cylce through erosion or mining.
– It is soluble in H2O as phosphate (PO4)
– It is taken up by plant roots, then travels through food chains.
– It is returned to sediment 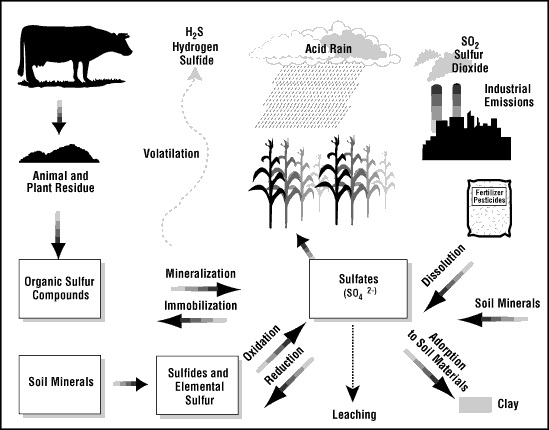 Facts:
– Component of protein
– Cycles in both a gas and sedimentary cycle.
– The source of Sulfur is the lithosphere(earth’s crust.
– Sulfur (S) enters the atmosphere as  hydrogen sulfide (H2S) during fossil fuel combustion, volcanic         eruprtions, gas exchange at ocean surfaces, and decomposition.
– H2S is immediately oxidized to sulfur dioxide (SO2)
– SO2 and water vapor makes H2SO4 ( a weak sulfuric acid), which is then carried to Earth in rainfall.
– Sulfur in soluble form is taken up by plant roots and incorporated into amino acids such as cysteine. It then   travels through the food chain and is eventually released through decomposition.