Supporting article L: Where do Oil, Coal and Gas (fossil fuels) come from?

Fossil Fuels: Their origins and the various forms they have taken on

Fossil fuels take millions of years to make. We are using up the fuels that were made more than 300 million years ago before the time of the dinosaurs. Once they are gone they are gone.
So, it’s best to not waste fossil fuels. They are not renewable; they can’t really be made again. We can save fossil fuels by conserving energy.

Where Fossil Fuels Come From

There are three major forms of fossil fuels: coal, oil and natural gas. All three were formed many hundreds of millions of years ago before the time of the dinosaurs – hence the name fossil fuels. The age they were formed is called the Carboniferous Period. It was part of the Paleozoic Era. “Carboniferous” gets its name from carbon, the basic element in coal and other fossil fuels.

The Carboniferous Period occurred from about 360 to 286 million years ago. At the time, the land was covered with swamps filled with huge trees, ferns and other large leafy plants, similar to the picture above. The water and seas were filled with algae – the green stuff that forms on a stagnant pool of water. Algae is actually millions of very small plants.

As the trees and plants died, they sank to the bottom of the swamps of oceans. They formed layers of a spongy material called peat. Over many hundreds of years, the peat was covered by sand and clay and other minerals, which turned into a type of rock called sedimentary.

More and more rock piled on top of more rock, and it weighed more and more. It began to press down on the peat. The peat was squeezed and squeezed until the water came out of it and it eventually, over millions of years, it turned into coal, oil or petroleum, and natural gas.

Coal
Coal is a hard, black colored rock-like substance. It is made up of carbon, hydrogen, oxygen, nitrogen and varying amounts of sulphur. There are three main types of coal – anthracite, bituminous and lignite. Anthracite coal is the hardest and has more carbon, which gives it a higher energy content. Lignite is the softest and is low in carbon but high in hydrogen and oxygen content. Bituminous is in between. Today, the precursor to coal—peat—is still found in many countries and is also used as an energy source.
The earliest known use of coal was in China. Coal from the Fu-shun mine in northeastern China may have been used to smelt copper as early as 3,000 years ago. The Chinese thought coal was a stone that could burn. 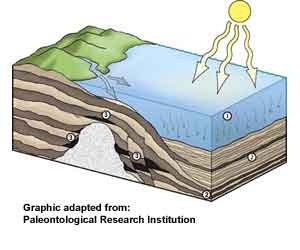 Oil or Petroleum
Oil is another fossil fuel. It was also formed more than 300 million years ago. Some scientists say that tiny diatoms are the source of oil. Diatoms are sea creatures the size of a pin head. They do one thing just like plants; they can convert sunlight directly into stored energy.

In the graphic on the right, as the diatoms died they fell to the sea floor (1). Here they were buried under sediment and other rock (2). The rock squeezed the diatoms and the energy in their bodies could not escape. The carbon eventually turned into oil under great pressure and heat. As the earth changed and moved and folded, pockets where oil and natural gas can be found were formed (3).

Oil has been used for more than 5,000-6,000 years. The ancient Sumerians, Assyrians and Babylonians used crude oil and asphalt (“pitch”) collected from large seeps at Tuttul (modern-day Hit) on the Euphrates River. A seep is a place on the ground where the oil leaks up from below ground. The ancient Egyptians, used liquid oil as a medicine for wounds, and oil has been used in lamps to provide light.

The Dead Sea, near the modern Country of Israel, used to be called Lake Asphaltites. The word asphalt was derived is from that term because of the lumps of gooey petroleum that were washed up on the lake shores from underwater seeps.

In North America, Native Americans used blankets to skim oil off the surface of streams and lakes. They used oil as medicine and to make canoes water-proof. During the Revolutionary War, Native Americans taught George Washington’s troops how to treat frostbite with oil.

Oil and natural gas are found under ground between folds of rock and in areas of rock that are porous and contain the oils within the rock itself. The folds of rock were formed as the earth shifts and moves. It’s similar to how a small, throw carpet will bunch up in places on the floor.

Natural gas
Sometime between 6,000 to 2,000 years BCE (Before the Common Era), the first discoveries of natural gas seeps were made in Iran. Many early writers described the natural petroleum seeps in the Middle East, especially in the Baku region of what is now Azerbaijan. The gas seeps, probably first ignited by lightning, provided the fuel for the “eternal fires” of the fire-worshiping religion of the ancient Persians.

Natural gas is lighter than air. Natural gas is mostly made up of a gas called methane. Methane is a simple chemical compound that is made up of carbon and hydrogen atoms. It’s chemical formula is CH4 – one atom of carbon along with four atoms hydrogen. This gas is highly flammable.

Natural gas usually has no odor and you can’t see it. Before it is sent to the pipelines and storage tanks, it is mixed with a chemical that gives a strong odor. The odor smells almost like rotten eggs. The odor makes it easy to smell if there is a leak