The causes of Cultural Eutrophication

Eutrophication occurs when large quantities of nutrients such as nitrates and phosphates enter an aquatic environment. Sources of these nutrients include animal wastes, agricultural runoff, and sewage. The ecosystem quickly experiences an increase in photosynthetic and blue-green algae, as these organisms thrive in the presence of the added nutrients. An algae bloom occurs as the algae accumulates into dense, visible patches near the surface of the water, prohibiting light from penetrating deeper areas of lake or stream. Some fish are unable to survive without this light, but for them an even more serious problem arises when the algae begin to die. At this point, oxygen-demanding bacteria take over the ecosystem, decomposing the algae and using up dissolved oxygen in the process. These bacteria increase the biological oxygen demand (BOD) of the ecosystem. BOD is the amount of oxygen required for the decomposition of organic compounds by microorganisms in a given amount of water. It is usually measured in milligrams of oxygen consumed per liter of water. Biological oxygen demand is important because it affects the amount of dissolved oxygen available to all species in an aquatic ecosystem. A higher BOD indicates a lower level of dissolved oxygen. This lower concentration of oxygen causes many fish to suffocate, and as they die, the number of oxygen-demanding decomposers increases even more. 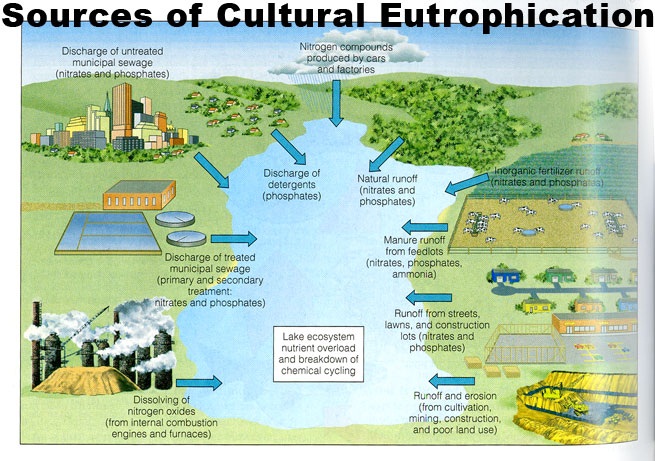 Causes of Eutrophication
The two major causes of eutrophication are excess nitrates and excess phosphates in water. It is important to study these nutrients because oftentimes, human activity is responsible for their negative effect on the environment.

Nitrates
Nitrates (NO3-) are water-soluble (they dissolve easily in water), and are commonly applied to agricultural fields as fertilizer. Once applied, nitrates may leach into groundwater or erode and end up in surface runoff. Eventually, they may enter a lake, river, or stream and contribute to eutrophication. Nitrates can also vaporize into the atmosphere, where they become a major source of acid rain. When ingested by organisms in drinking water, nitrates bind to hemoglobin and reduce the oxygen-carrying capacity of the bloodstream. This form of nitrate poisoning seems particularly prevalent among amphibians, and may be contributing to a worldwide decline in the biodiversity of these species.

Phosphates
Unlike nitrates, phosphates (PO43-), are not water-soluble; they do not usually dissolve in water. However, they do adhere to soil particles, and as such often accumulate in soil and erode along with soil into aquatic environments. Phosphates also form a major component of most fertilizers, and in conjunction with nitrates, they have made agriculture the largest source of nonpoint water pollution in the United States.

Eutrophication: Before and After

Controlling Eutrophication
The following is a list of methods that can be used to control eutrophication:
• planting vegetation along streambeds to slow erosion and absorb nutrients
• controlling application amount and timing of fertilizer
• controlling runoff from feedlots
• researching use of biological controls; for example, the process of denitrification uses specialized bacteria that convert nitrates to harmless molecular nitrogen