Supporting article L: Energy Flow in the ecosystem and how it relates to various food webs

Energy Flow
Everything needs energy to motion (move around), living things are no exceptions. The sun is the ultimate source of energy for every ecosystem. The energy flow of an ecosystem starts the moment photosynthesizers capture sun light and transform it into a stock of organic compound like glucose that stores heat and energy for later use, and ends until the energy is used up or released into the surroundings in metabolic processes. In between them, energy transfers from one organism to another at the aid of food webs, each of the organisms receiving only a small percentage of the total energy carried in the one being consumed, because of all the processes indicated in this diagram:

A certain amount of energy is egested in feces or excreted in urine and sweat. Of the assimilated energy, a portion is utilized in cellular respiration and thereafter becomes heat. The remaining portion of energy is converted into increased body weight or additional offspring.

Example of Primary Productivity
In tropical forests and in marshlands, between 1500 and 3000 grams of organic material are normally produced per square meter per year. Corresponding figures for other communities are: temperate forests, 1100 to 1500 grams; dry deserts, 200 grams. For such highly productive communities as estuaries, coral reefs, and sugarcane fields, the figures may range from 10 to 25 grams per day, for comparable annual yields of 3600 to 9100 grams.

We are now going to explore what happens to the energy stored in autotrophic biomass. Biomass, is the net weight of all organisms living in an ecosystem, which, increases as a result of its net production. Secondary productivity is defined as the rate of biomass accumulation by heterotrophs (herbivores, carnivores and detritivores). Refer back to the energy flow illustration in section 4.3, secondary productivity is just the portion that is used to increase body weight and nurture offspring.

2. Food Webs and Trophic Levels
Food webs refer to the complicated feeding relationships that exist among organisms in natural ecosystem. The ocean food web displayed below, however, is just the grazing food web that begins with green plant, or the producer.

This ocean food web displayed above shows that krill and other herbivorous plankton feed on phytoplankton, the producer, while birds and fish feed on krill, but they are in fact omnivores because they also feed on plankton; squid hunts fish for food while enjoying some plankton once in a while as well. These herbivores and omnivores all provide energy and nutrients for a number of different carnivores, such as seals and whales.

Another sort of food web called detrital food web is revealed in the diagram below. Compared with grazing food web, it is a food web more involved with decomposition processes, and more engaged in abiotic components of an ecosystem. 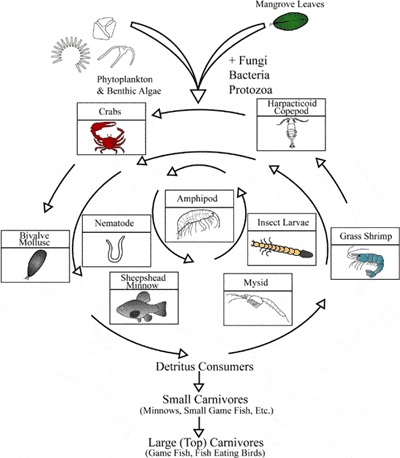 This decomposer food web is modeled upon the detritus food chains that are based on mangrove leaves which fall into shallow estuarine water of South Florida. The bacteria and fungi of decay are the decomposers, but they can be food for other detritivores. Note that detritivores are not necessarily bacteria or fungi, they can also be large scavengers such as crabs and shrimps that feed on dead organisms and also the cast-off parts of them.

There are producers and consumers in a food web. Producers are those able to synthesize food for themselves, like phytoplankton; and all the others are consumers that rely on producers directly or indirectly for a living. Among these consumers, several different levels may be recognized. Primary consumer, or herbivores, feed directly on the green plants; secondary consumers, carnivores and parasites of animals, feed in turn on the herbivores. Decomposers or detritivores break down the organic matter accumulated in the bodies of other organisms.

All these levels, if we link them one to another in a straight-line manner, according to who eats whom, we have food chains. Food chains are selected single-lane food relationships in a series among organisms from a more complicated food web, as below: 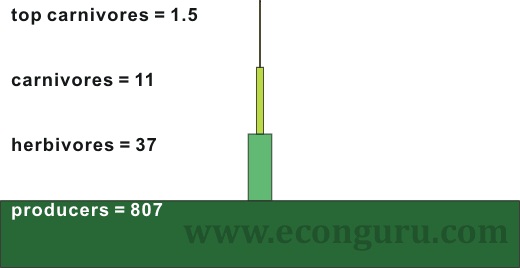 Numbers indicated in the diagram are measures of biomass, and the widths of the colored rectangles are so drawn that the proportions are respected. A plant fixes about 1% of solar energy that falls on its green parts. The successive members of a food chain, in turn, process into their own bodies about 10% of the energy available in the organisms on which they feed.

Aside from pyramids of biomass, there are also ecological pyramids of numbers and energy, more or less in the same impressive construction that slender representations of top consumers are set upon a huge foundation of that of producers. At the top of most food webs, just imagine the number of plants that have to be grown to support all human being.